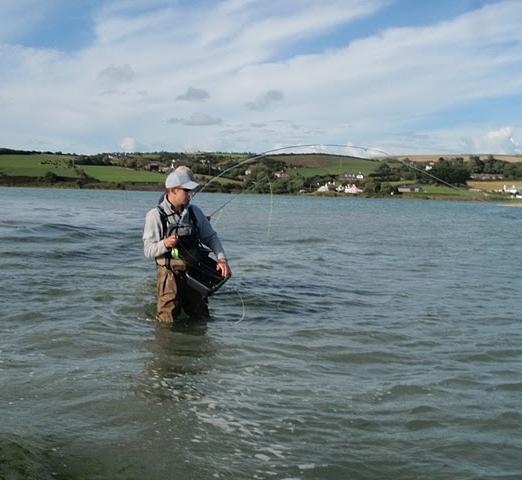 The Meaning of Life.........................
Bass On!
Stevie a customer from Northern Ireland gets a nice reward for his efforts . A nicely bent rod on a beautiful day in stunning scenery with good friends, thats what its all about........
There was loads of bass around that day and we caught our fair share to about 6lb. The japweed in the water made it hard work for the lads working their flies but there was no way these boys were going to take an easier option to target the fish.
Roll on the spring!
Posted by Danny Wyse at 12:35 AM No comments:

Night Lure Fishing - but where?

As the surf pounded onto the sandy beach in the dead of night, forcing water to flood up over the dry sand it grabbed the Amphipods by suprise. These tiny nocturnal creatures, the size of tik-tacs, which are also known as sandhoppers were getting picked up by the advancing waterline and being dragged out from the beach by the undertow, in their hundreds.

The bass knew this and were  in the surf  hoovering up masses of them. Julian and I were there aswell, it was a regular habit of ours now. Casting our lures out into the darkness we were confident of catching decent sized fish. Using this technique before, half a dozen fish per rod for a two or three hour session was reasonably common ,the better nights reached double figures ,both numbers and size!

Nocturnal prey = noctural fishing?
We know the inshore waters become a hive of activity at night with shrimps, slaters, hoppers, fish and the like all prefering to go about their business in the gloom. We know that bass come in and are able to see/find your lure even in the darkest of nights.
A very slow retrieve can often improve catch-rate. Torch light on the water is a no-no, as is excessive noise. Lure choice is your personal preference with hard plastics and softs, either paddle or straight tail all catching fish.
Black and white are popular colours, but could there be better ?
Its safer with a friend and someone should know where you are and what you're doing, especially if you're on your own.There we have it a quick over-simplified version of  night lure fishing.............but will it work everywhere?

Jersey Bass Guides have great success  targeting bass on the island at night and I don't doubt them for a second when they say that darkness is definately better than daylight.
Is it possible that this is a trait of their local bass population?
During the day could most fish be offshore chasing the sandeel shoals which are active in the daylight and then bury themselves at night?
Maybe then heading inshore to target the prey that are more abundant in darkness, while it is quieter with less human and bird activity?

In other areas sandeel shoals may feed inshore during daylight, thus bringing the bass in with them and  creating better fishing oportunities while the sun is up that can't be matched in darkness?
The answers to these thoughts I do not know, but judging from internet feedback not eveyone is finding night luring a successful method on their venues.
In fact some very talented anglers are finding the daylight fishing is far better and their catch rate leaves them in no doubt about that.

As more and more people get out there and give it a go it will be interesting to ponder the feedback coming from the different coastal regions.

Posted by Danny Wyse at 6:22 AM No comments:

Not me i'm afraid but one lucky fella had a perfect start to 2011. A member of the Arigadeen angling club fished Courtmacsherry estuary with peeler crab and caught this cracking fish , well done that man.

Also  reports of two other specimen bass caught on crab in the area , this first week in January .
After a lot of us in West Cork have put our lure rods away for winter fish like this turn up and make a mockery of our haste, one man who kept at it, Brendan Walsh , took his first fish of the year on one of the Megabass soft plastics , proving the worth of keeping the faith .