I like the August full moon ,on a memorable one in 2008 I caught 21 bass in a two hour frenzy of action. I was fishing soft plastics over a reef in the late afternoon and left the venue while the fish were still feeding hard  , I'd had my fill, the fishing was just too easy.
Now my situation is different , I no longer fish only for my own personal enjoyment. There are other factors governing the decisions I make, including where I go and what techniques I use.
Taking the easy option doesn't teach me anything new and also gone are the days when I can hammer a mark without caring whether it effects the territorial stock that may be present.
Ofcourse I still love being on the coast trying to make sense of this fascinating fish and its habits but I'm looking at it from a different angle now.

On this years coinciding lunar event I spent an hour or two covering some new ground in the afternoon, it was tough going in the blustery conditions but was very satisfying when I acquainted myself with this 4lb fish ,taken over a likely looking reef, on a Komomo. 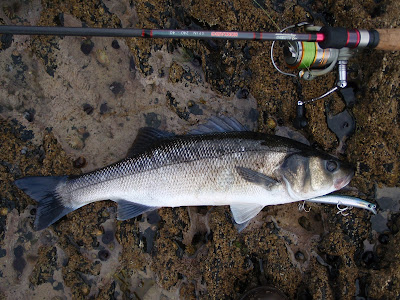 Isn't it often the way how you stop concentrating and your mind drifts............. Then bang! all of a sudden the lurching rod and screeching drag shock you back to reality. This was one of those moments and was a nice reward for my efforts. Another mark , chalk it down.

It was on a second outing under that big bright moon though that things really kicked off . I was getting  knocks on the shallow divers I was using , it may have been aggressive territorial behaviour, I'm not sure? Whatever it was they weren't biting the lures so I tried a rubber eel that I thought would induce a proper take and it didn't let me down.......first cast and this fish decided to have a go. 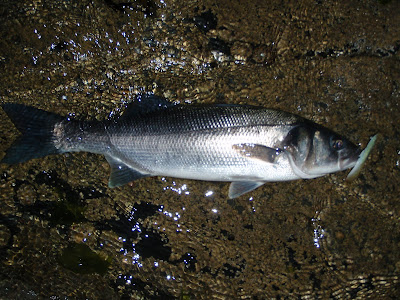 The next hour was great and by roaming and fishing I took 9 more fish including a few that did take the hard plastics. One hit was after I let the plug sit static on the surface for over 20 seconds, the slightest of twitches and wallop!  I had a real tussle on my hands as this fish ran, paused, ran, paused and after another run it was a long way out and I was beginning to get concerned it might find a snag . I manged to apply enough pressure to force it up to the surface and after a lot of toing and froing I eventually brought my potential lunker in to the shore. Turned out to be a foul hooked 5lber and I had to laugh to myself ,what a scrap though.
I left the area while the fish were still feeding hard and in no doubt that I would easily add to my tally . After a total of 11 fish for the day with a couple nudging the 6lb mark I was happy, and as said, hammering the mark didn't seem like it would be beneficial to future visits................Hope you all had a good weekend Danny
Posted by Danny Wyse at 3:47 AM 1 comment:

Eddie a regular customer of ours from London was over in Kinsale on a family visit and was looking to try one of our night guided sessions on the fly and lure. He'd just come back from two weeks salmon fishing in Iceland but he still managed to get a free window from family duties once the little ones were tucked up for the night.
Although the moon was big and bright occasional cloud cover stopped the glare long enough to keep our confidence high.
A silvery patterned Komomo 2 got the ball rolling with this 3lb fish. 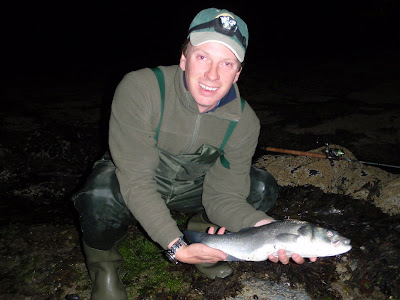 10 minutes later a Feedshallow accounted for a better fish nearing the 5lb mark. 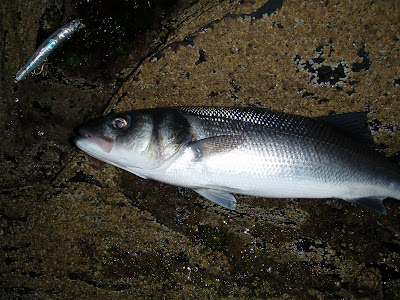 With a couple landed Eddie tried the fly rod and was getting a great line out . He was unlucky not to hook into one of the three bites he had over the next 45 minutes,it was frustrating and exciting in equal measures.
We both think a bigger fly would have attracted more bass attacks on the night but alas Julian had our fly boxes and couldn't make it along so we were using the couple that Eddie had brought himself . (note to self , keep a box in the van!)
A return to the lure rod bought instant success with a fish of around 4lb and rounded off this short but highly enjoyable session. Another Komomo 2 this time in joker flashing plate did the business. 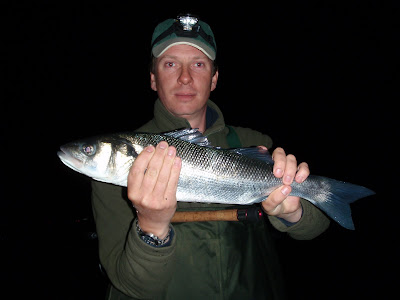 As Eddie was on morning duty with the little ones we didn't have the time to stay and try a few soft plastics but I'm confident they would have been gobbled up.
It was great to get out before these big southwesterlies hit the coast today as the lures might have to take a rest for a couple of days?
Posted by Danny Wyse at 4:43 AM No comments:

Daytime fishing has come back on this last week thanks to bit of swell on the shoreline.
Reading other blogs and internet catch reports it seems we weren't the only bass addicts finding fishing hardwork during July daylight hours.
One mans poison is another mans pleasure though and boat anglers had great fishing off The Old Head of Kinsale with plenty of double figure cod around and more blue shark than I've heard of for years.
I think we'll be joining them if the balmy weather comes back.

It shouldn't be too long now before the sandeel start using the inshore sandbanks to breed and big catches of bass will be back on the agenda. 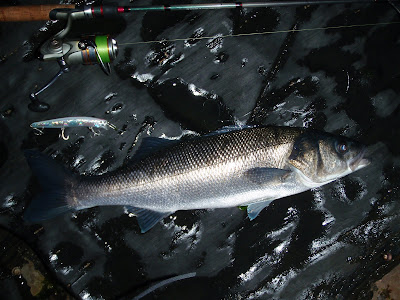 At 2.8kg ,or just over 6lb,this bass gave me a good deep fight on Sunday evening as the day was turning to dusk and was my best of the session and infact the weekend.
It made up for the two decent fish I lost on my other outing on Friday night.
One of the fish was played out and at my feet ,I was just about to land it when the line sprang slack . I had that horrible feeling that the line had snapped and just crouched down and put my head in my hands. It had been a real effort bringing that fish to shore , negotiating exposed rocks on the way and that feeling of horror had come over me thinking I'd lost the fish with the lure still stuck in it .
Thankfully I came to my senses and wound in the slack line finding my slug-go was still well and truly attached , phew!
We all get those nights now and again though ,for whatever reason you're just not in the zone , missing bites , losing fish and generally getting frustrated with yourself .
I still managed to match Julian at 4 fish each over the hour and a half we fished in the gloom ,but its the big ones lost that stick in the mind. 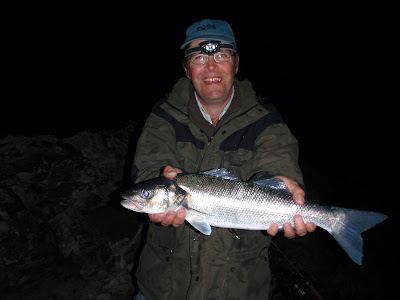 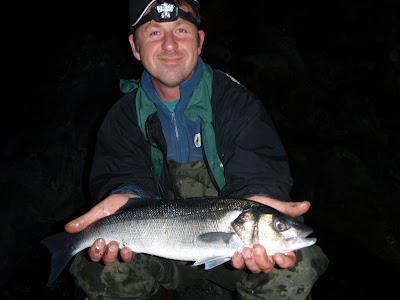 ﻿So no Monsters this weekend but theres always the next session ???
Happy Hunting.......
Posted by Danny Wyse at 1:45 AM No comments:

Its been tough fishing in the daylight lately which is not uncommon in July and August. The northerly based winds have provided no wave action on the shoreline and bright sunshine has fiercely penetrated the calm inshore waters with its glare, creating a no-go area for fish who like to have a bit of cover as they go hunting. The estuaries with their stronger tidal movement and depth have provided the most consistent sport for us while the sun has been up. Cork harbour is throwing up a few fish for local anglers aswell.
Its still worth a look on the rockier areas if you're very stealthy with your approach as fish can often be seen lulling about the place or sleeping up against the rock face inside gullies . A smaller lure often imroves your chances in my opinion .
If your into floatfishing, live shrimp or another live-bait should get better results than even the most attractively worked lures in these conditions.
Fishing at night time has been a lot more productive, the fish have just had more confidence coming inshore to feed under the cover of darkness.
You need to be steady on your feet to confidently fish on the rocks in the dark as it's obviously more dangerous than fishing in the daylight.

One recent mission was to teach some lads from Limerick how to fish for bass . These guys who moved to Ireland from the Philippines and normally fish the Clare coast were great craic , laughing and joking all day.
And as is often the case the son got the better of the father . 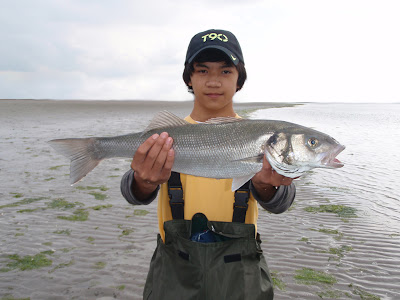 Gabriel  16 yearold with his first ever bass at around 5lb, took to working soft plastics with ease. 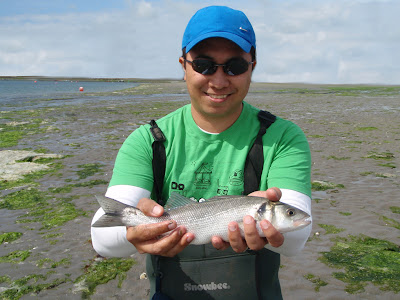 Wilbert ,Gabriels  father wasn't quite finding the same quality fish and was the butt of jokes for this little fella, no problem to a man with great sense of humour. 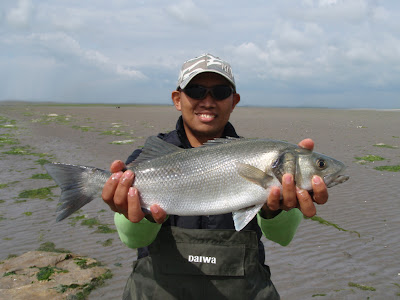 Another first and another happy angler with this fish falling for a Berkley soft plastic . A Maria Chase picked him up another fish as day progressed. 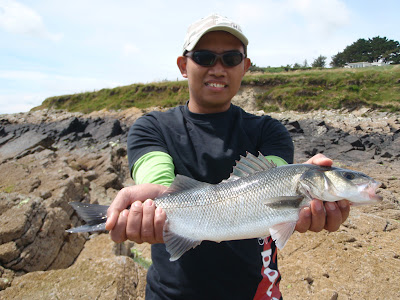 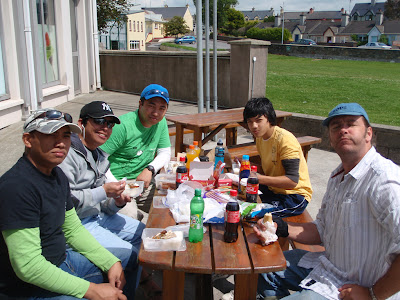 Spirits were high at lunch time after a good start to the day . But the bright calm conditions made tough work of the afternoon with one bass and six pollack to show for the lads remaining efforts. Just as important as the catching of fish is the looking after your venues and time was spent, as always, discussing the importance of catch and release for this slow growing species. 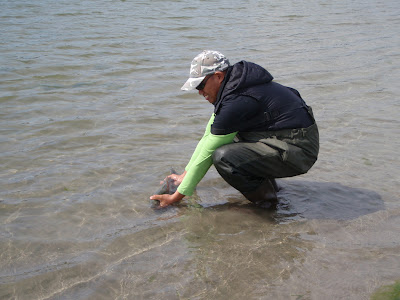 As ever all the fish on the day were happily returned . Even my badly taken "trophy shots" are a better prize than a dead bass.
Hopefully these lads will now be able to find a few bass on their own grounds up in county Clare and I look forward to future reports.

Cuan and Feilim booked in the same extremely bright weather and I wasn't that confident ,on the morning ,with our prospects for the day . I hadn't factored in Cuan's infectious enthusiasm though, and the lads did a great job catching a couple each and losing the odd one . 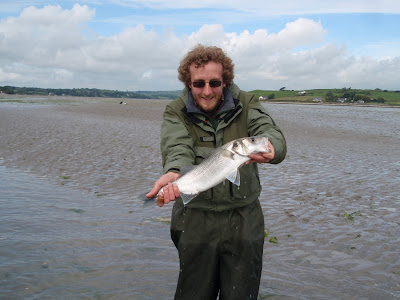 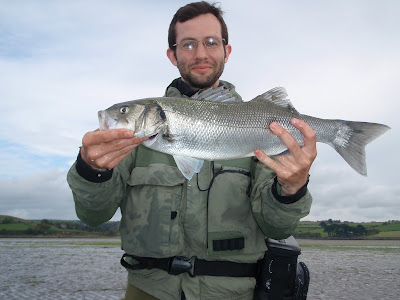 We will do some night session's in future during July and August as recent trials have gone well.
We also saw our second "Moon Bow" lately , which was awesome! I've got to get get a better camera though as attempts to photograph it proved futile.
We have a Peregrine falcon hunting near one of our marks so I need to get back and get a proper picture of that too. The waterproof digital just isn't up to the task anymore,  research will have to be done as I don't know a whole lot about camera's?
Looking forward to getting out on the boat more now as all this walking in the hot sun is getting to me.  Bass wishes     Danny
Posted by Danny Wyse at 2:08 AM No comments: