You ease back the throttle as you approach the small rocky bay, moving as quietly as a boat and engine can allow.With wind and tide direction calculated the engine is cut at the start point of your planned drift.
Picking up your pre-rigged rod and unclipping the chosen lure a quick scan of the immediate area is made. A small gully is spotted with some fizz in it, this white topped area of turbulence has been created by the gentle swell hitting a recently submerged ledge of rock just in front of the entrance to the gully. As you prepare to cast into this potential fish holding position you remind yourself not to over cast as this is the shoreline and your prized lure will be high and dry if you over do it.
You ease back on the power as you pull the rod through but your smooth technique and modern rod make the lure fly better than anticipated .A finger pinch on the line stops the lure mid air and it drops straight into the gully. Mild panic turns to pride as you congratulate yourself on a skillful cast.
You take up the slack as your lure is being washed around in the surface commotion, the lure starts to move but before you even settle into the retrieve something grabs the lure, the rod slams over and your heart is in your mouth...............

This type of fishing is great for many different reasons but the two points that I'm focusing on here are the ease at targeting the shoreline and that even in a boat it can be done with some stealth as its possible to stay a good distance away and cast in.

Approaching the same mark from the shore many anglers focus their first attention on the potential fish holding areas at the range of their casting ability. By walking out to the waters edge and casting out a lure they may well of just missed some decent fish. Even anglers who think they are being stealthy are quite often not . I've done it myself and seen it done many times, if you see a fish when you approach it probably saw you first, never mind the ones that you didn't see.

On some days Julian ,my fishing buddy, and I may have walked a long way carrying gear as its not always possible to ramble along the shoreline fishing as we go, if it is then spooking fish in one spot is not as bad, as at the next we can be more careful.
If we've made the effort though, to first drive to an area and then walked to our chosen piece of coastline, then we want to maximise our chances by covering the venue as efficiently as possible. Fishing short is our first focus and we view this as part one of the session . The plugs stay in the box for now and generally flies or soft plastics are put into action.
It actually takes quite a lot of effort to be stealthy especially when you're excited and you just want to get on with it . Crouching as low as possible or crawling on your knees and spare hand can be uncomfortable and slow to get about, never mind the fact that it feels daft. Keeping the rod low and avoiding temptation to get your head  up and have a look take concentration, but if the tide is flooding and conditions are calm and clear it can make the difference between luring bass or scaring them.
As is well known bass will come into very shallow water during the flood  so practising to fish the margins when you're shorefishing will improve your catch rate in the long run , try surface fishing  that weightless soft plastic or send a fly out into those first few metres of water, use your imagination, it's possible to cast even the smallest of lures , what about an imitation  shrimp or crab ? There's all sorts of possibilities
After we've covered our available shoreline by fishing short we'll cover it again at distance ,usually though we've already caught bass. 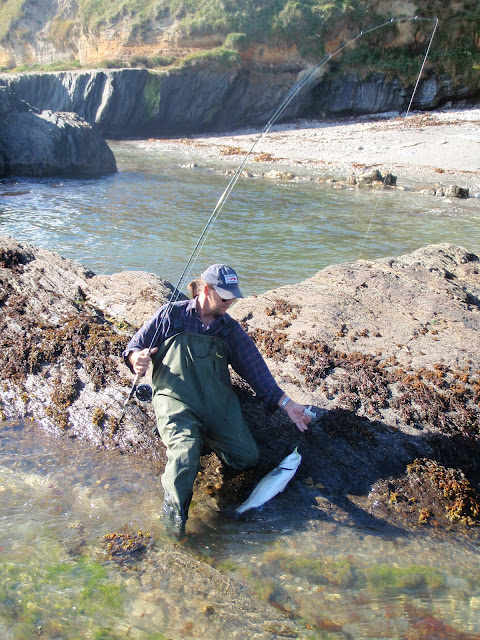 This fish was caught on a beautiful day near Rosscarbery in West Cork , it was hooked in the shallow clear water behind....... Julian had to be very careful and quiet in his approach , if he had walked on the rock behind him he would have spooked the fish and would probably have not even seen it as it swam away.
Posted by Danny Wyse at 5:21 AM No comments:

Spring is in the Air 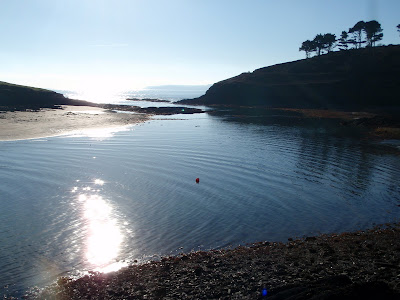 Days like this one a couple of weeks ago help to ease me through the winter .
Last week  though it was 100 km/h winds that we had lashing the coastline and some nice bass were caught by those hardy enough to get out in it. I've had reports of an 8lb , a 10lb and 12lb bass getting caught during the rough weather that week.
Its been a good winter for big fish on baits and razor fish has been a successful one , with no peeler crabs coming out of the traps lately and probably not for a couple more weeks either, getting yourself some shellfish for bait can make all  the difference.
Looking at an empty mooring reminds me  the boat needs it's annual  overhaul aswell.......
Not today though as its my first competition of the year ,  fishing against two current World Team Champions , Derek Kendrick and JP Molloy and a host of other top class anglers its not gonna be easy!
I'll just have to get lucky and draw a decent peg.
Posted by Danny Wyse at 11:23 PM No comments:

Rotting kelp or rather the creatures in it , provide a banquet of food for fish and birds .
Mike Ladle has written some excellent material on this subject and anyone who hasn't read his work is missing out and should buy his and Alan Vaughan's book "Hooked on Bass", it is perfect reading for this time of year and is a book you will keep on picking up.

To recap quickly, the kelp gets stranded on the shore on spring tides and is left high and dry. As it begins to decompose it attracts flies ,which lay their eggs ,which can quickly become a mass of maggots.  These larvae become the main course for species further up the food chain including mullet and bass.This happens when the weed gets lifted again at the beginning of the next spring tides . 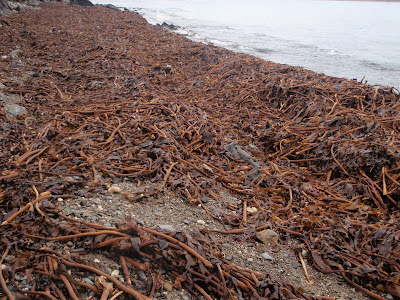 I have also found that its not only maggots that are prey for bass around these areas.
The main diet of  isopoda (slaters) and amphipods (sand hoppers) is also decomposing seaweed and plenty of these can  be found in the kelp area, especially at night!
These little fellas are crustacea and are related to shrimp, crab, lobster and crayfish , and are definately on  bass's menu.

The gut contents of bass that have been feeding on slaters and hoppers can be quite astonishing .
A big congealed mound , the size of an apple, can be found in the stomach with possibly 100-200 of them all digesting together. I hardly ever keep a fish nowadays so unfortunately have no photo to put up, but believe me at certain times they eat a lot of these creatures.

We sometimes fish around these areas in the darkness especially when there is a bit of swell to lift and give the kelp a good shake. It is easier to sneak up and start fishing in darkness especially when the water is clear. The added activity of the nocturnal creatures may also help to draw the bass in .
Even though the bass are feeding on small items of food they will still take a fairly large lure in these situations. They probably pick off the odd small fish , or atleast keep an open mind as to attacking one when hunting around this food feast.

To fish into the floating kelp you need suitable weedless lures to avoid hooking heavy kelp stalks. Wading out a bit may help you avoid the worst of it.
If you prefer using plugs or fly-fishing, concentrating down-tide of the kelp bank during the first hour of the ebb can be effective.The tide run carries suspended food towards patrolling fish , usually mullet and bass but sometimes decent pollack turn up and give you a suprise.
At night time there are no birds around,..........if you approach these areas in daylight there are usually lots of birds feeding in amongst the waves and kelp. As you get closer they all fly off creating a bit of a commotion , I wonder can  bass pick-up on this simple action and possibly become more alert to the approaching danger?..........Who knows,maybe i think too much?.............I think i need to get out fishing!
Posted by Danny Wyse at 5:54 AM 1 comment: 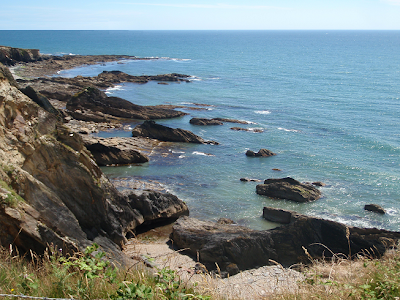 Thats the trouble with living in West Cork , I get time off from work and I should  go on holiday somewhere.
But I can't think of anywhere ,short haul, I'd rather be.........especially when the sun shines.

Last year we had plenty of fine weather and as you can see on the website gallery, the  bright sunshine didn't stop us catching bass . I seriously can't think of anything i'd rather be doing?
Posted by Danny Wyse at 11:46 PM No comments:

It now appears we are going to have a new goverment and ministers after the forthcoming election. Sadly this means we are going to have to re-do a lot of the work that has been done before to protect our fishing.
It is vital that we keep pressure on these new ministers as they will soon be in a position to influence how our bass stocks are managed in the future

To help all you need to do is down load this flyer
http://www.irishbass.org/DeadLoss.pdf
and hand it to the canvassing politicians in exchange for the literature they will be handing you , when they come calling to your door before the next election.
There is no need to get into dialogue with the politicians as all of them will have been contacted before hand about the issues involved.  For more information on this please log onto http://www.irishbass.org/ we really need the help of all anglers regardless of what species they fish for , thank you.
Posted by Danny Wyse at 1:11 AM No comments: