Bass learn to recognise lures.
I've believed this since my involvement in the commercial rod and line bass fishery in Wales in the 80's and early 90's.
During the developement of this fishery it became obvious to the guys involved that somehow bass had the ability to suss out that even the most naturally presented bait can represent danger.
Redgills were the first lure used and caught well for an artificial. Then one of the small boat crews got hold of a sandeel seine to catch this perfect bait and secretly went about using this deadly new technique. If you happened to be a very close friend of this crew they would give you some sandeels. If they gave you 30 eels, you caught 30 bass ! Thats how it was then , the bass attacked the sandeels with abandon and fishing with them became the only method used in the fishery.
Not for one second, did anyone think then that one day the bass would stop attacking sandeels, after all they were their natural food.
Day after day , season after season, the same boats with the same skippers fished the same areas using sandeels. This intense pressure cannot be compared to the amount of attention our shorelines receive from general angling. It was/is an unusual situation.
The sandeels effectiveness declined slowly season by season until eventually it became practically useless as bait , other methods had to be used and caught plenty of fish but amazingly the shoals of fish had learnt , and through second hand (indirect) observation  in probably 99% of cases, that a sandeel "presented" on a long flowing trace of either mono or flourocarbon was something that was now dangerous to attack.
This attitude shown by the bass lasted for whole seasons, and I suspect sandeels would have to be stopped being used for a number of years before they could attain the catchability they once had in the area.

The above is a quick/shortened example of one of my experiences of observing that the bass has the capability to learn. But how does it apply to our fishing?
That depends on the type of areas you like to fish in. The bass in Ireland are generally localised/territorial and especially so in rocky areas . If they do ,as I believe, learn to relate trauma or danger to a specific lure through ,either experiences they've had (direct), or through the observations of other fish (indirect) , then it is possible that last seasons "super lure" might not have the miraculous effect on your local fish this season as it did last .
The lure will ofcourse not stop catching all of a sudden, but in my experience its effectiveness will decline and maybe "resting it" for a while may be a better option in the great scheme of consistent catches.
I'm not suggesting either that you need a lure box that resembles a tackle shop to keep catching consistently.
I just think a sensible rotation of lures will help to keep things fresh and is an approach I use in my fishing.

I don't expect everyone to agree with my theories , infact I've noticed most people don't which has in the past left me feeling a bit confused. But I was glad when recently, in the middle of a debate on this subject,  someone brought my attention to this Bassbuzz Link.
A very interesting article that got me thinking "maybe I'm not going mad after all!"

P.S. If any of you have a copy of the classic  "Bass Fishing on Shore And Sea" written by the brilliant John Darling ,you will find photos in the centre of the book of some of the Welsh bass boys that I know going about the fishery.I enjoy looking at the boats and seine netters from days past, and it could give you a bit of a picture of what I'm waffling on about.

P.P.S.   The season is underway and bass along with seatrout are now being caught on lures around the coast, so get out there and happy hunting.
Posted by Danny Wyse at 3:58 AM No comments: 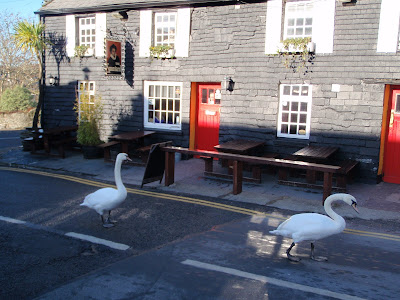 Wishing you all a great day and if your going for a pint of Guinness, slaintè.
Heres a couple of fine birds I met at The Spaniard Inn , in Kinsale recently. I'm no expert but the one at the back could be the male bird.
Posted by Danny Wyse at 4:03 AM No comments: